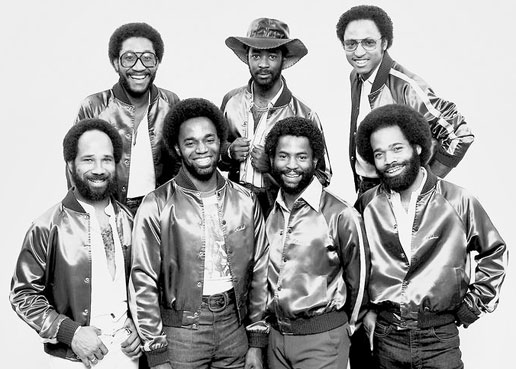 About Con Funk Shun Musician/Band Con Funk Shun is an American R&B and funk band popular in the 1970s and 1980s. Influences include James Brown and Sly & the Family Stone. History[edit] The band was formed by a pair of high school students in Vallejo, California, drummer Louis A. McCall Sr. and Lead singer/guitarist Michael Cooper. The two put together a group that included bassist Cedric Martin, keyboardist Danny "Sweet Man" Thomas, trumpeter Karl Fuller, and woodwinds player Paul "Maceo" Harrell. Soon thereafter, this fledgling group's classic lineup became complete when singer/multi-instrumentalist Felton Pilate came on board. The band got their start as a backup group for the Soul Children under the name Project Soul. They began working with Stax Records staff songwriters, and while recording at Audio Dimensions, a Memphis, Tennessee sound studio, producer Ted Sturges both named the group (after an instrumental recording by The Nite-Liters) and produced their first album, Organized Con Funk Shun. In 1976, Con Funk Shun signed to Mercury Records, releasing 11 albums over a span of 10 years. The group's 1977 LP, Secrets, was certified gold in the US, as were 1978's Loveshine, 1979's Candy, and 1980's Spirit of Love. They scored a string of top ten hits on the US Billboard black singles chart, including 1977's "Ffun" (#1), 1978's "Shake and Dance with Me" (#5), 1979's "Chase Me" (#4), 1980s "Got to Be Enough" (#8), and "Too Tight" (#8). Tensions from within the group built over the 1980s, and the group's last album, Burning Love, was recorded without songwriter and vocalist Felton Pilate. After leaving Mercury, the band broke up in 1986, but some members of the group reunited alongside touring musicians for concerts in the 1990s. In 1994, Eric "EQ" Young joined Con Funk Shun. Young, a bass player, is a native of the San Francisco Bay Area and a veteran of the stage and a former Quincy Jones recording artist who has played for Con-Funk-Shun for the past 16 years. Other alliances include the Dazz Band and Radiance. Young has toured the US extensively and worked abroad for more than 20 years and recently traveled to Iraq to play for our troops. “I was born to do

Con -Funkshun, The R&B Funk Group   (Review)  My concept is; about how (Danny Thomas) who was an original member of the group, eventually ended up going in his own direction, and what he went through as a member of the multi-platinum R&B group back in the seventies. Then, now, and tomorrow.

Con Funk Shun was formed by high-school classmates Michael Cooper and Louis "Tony" McCall, along with Karl Fuller, Paul "Maceo" Harrell, Dennis Johnson, Cedric Martin, and Danny "Sweet Man" Thomas. All of them had been playing together since their high-school days in Vallejo, CA. Felton Pilate, also from Vallejo, joined the group after his band, a local rival, disbanded.

In the early '70s, the group was a backup band for the Soul Children with the name Project Soul. And when they weren't on the road with the Soul Children, they were creatively working with various Stax staff writers. In the mid-'70s, Project Soul made an effort to become a headliner, but they met dead-ends and little success. However, they found good fortune at Audio Dimensions, a Memphis recording studio owned by producer Ted Sturges. Around this time, he group named itself after the title of one of their instrumentals, "Con Funk Shun." During their three-year stint at Audio Dimensions, Sturges, besides owning the studio, was also Con Funk Shun's producer. Their association resulted in the group's first album, Organized Con Funk Shun.

As their sound developed, Pilate and Cooper emerged as the primary lead vocalists. Around the time their first album for Crankshaft Productions, Inc. was being recorded, the eighth member, MC and technician Dennis Johnson, left the group to attend seminary in California. By 1976, the group signed to Mercury, where they remained for ten years. Their first hit for Mercury was "Ffun," written by Michael Cooper as a tribute to the R&B/funk band Brick. One of the premiere party funk bands of its time, they also began recording ballads and instrumental tracks by the early '80s. Aside from being the primary musicians on all their albums, Con Funk Shun also contributed to each of their albums as writers, arrangers, and/or producers.

Burnin' Love, the septet's last album with Mercury, was recorded without their longtime musical center, Felton Pilate, who left the group in 1986 to become a successful producer. (Pilate eventually became the musical force behind MC Hammer.) Melvin Carter, a frequent collaborator of Con Funk Shun, joined the group upon Pilate's exit, and that same year Michael Cooper left for a solo career. Con Funk Shun disbanded after their last album with Mercury, but reunited in the '90s, and began performing at festivals and concerts around the world.

I live in Vallejo where the group is from and originated. I have direct ties to Danny Thomas, and access, I can get the permission to do this documentary and I was once a member/, vocalist and drummer, of one of Danny's post groups

The story of "Danny Thomas" and his experience as a member of one of all time greatest!  Funk/R&B groups "Con Funk Shun"

Is your project about an object, idea or cultural phenomenon? Describe it and tell us how it relates to the people involved in your project. You might have a topic about a game (video or otherwise), a tool, a social media related topic, an event or a meetup group. Tell us what it is.

The group goes back to the ealy 70's

Time is an important story element as well. Is there a period of time important to your topic/main character? A period of transition or change? How do you think of past/present/future in relation to possible story elements?

Tell us who your key audience is and why they will care about your project. Instead of saying “this is for everyone”, specify your demographic: tell us about other similar projects, movies, websites, online channels, movements, communities, etc.

The audience can be anyone 15-75 who has an interest in music, and wants to know what it's like to make it all the way to the top, and experience the obstacle's that can come along the journey

Welcome to Ex’pression Students. This is your first post. Edit or delete it, then start blogging!